Back on February 11, 2011, a report on the WTVM website reported a pedestrian bus accident involving an elementary school student.

Macon County, Alabama – A 5-year-old D.C. Wolfe Elementary School kindergartner is recovering in a Birmingham hospital following a bus accident. The unnamed driver of the bus struck the student after exiting the bus on Macon Co. Road 13, halfway between Tuskegee and Shorter, AL. According to police reports the driver was tested for drugs and alcohol use, but none were found. According to Superintendent Dr. Jacqueline Brooks, the student is improving and is expected to make a full recovery.

Pedestrian accidents related to school buses commonly involve the driver being unable to see students or other pedestrians near the bus. Other circumstances may involve the actual design of the roadway the buses travel upon. A story posted in The Marlborough Express, February 18, 2011 reported such an area known to have a high incidence of bus related accidents. During that time period there were two pedestrians struck by bus drivers on this dangerous roadway. Changes have been suggested by way of constructing pedestrian barriers to dissuade people from jay-walking. Authorities continue to raise awareness of bus safety.

Bob Riley, the Governor of Alabama made a proclamation of School Bus safety week to be held from October 18, 2010 through October 22, 2010. 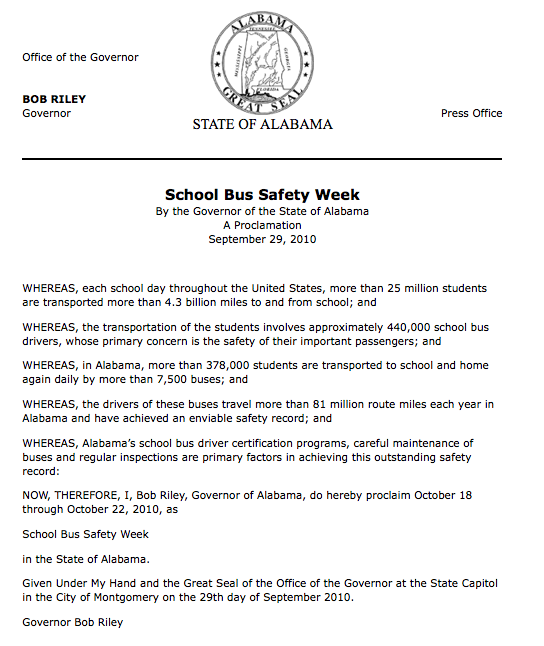 Over 378,000 students are transported by school transportation every day in Alabama. Unfortunately accidents happen. Statistically it is safe to ride a school bus. But, statistics do not comfort the parents of injured children, nor do they prevent school bus accidents. There is a low tolerance of error when it involves children. Many school jurisdictions place high standards on their school bus drivers as well as the maintenance of the buses themselves. Often parents ask about safety restraints.

The knee jerk reaction by many parents and authorities is to require students wear safety restraint belts. Many school districts already facing challenging budget deficits, are confronted with the dilemma of choosing between student safety and the cost of installing bus passenger restraints. This sentiment is often mirrored in the comment sections left on the websites of newspapers reporting such tragic bus accidents.

Dr. Jay Lindly discusses a three-year pilot study that analyzes past school bus accidents, examines data from overhead cameras on school buses for information about use of seat belts, and the results of a cost-benefit study on what it would cost to add safety belts to all school buses in Alabama.

Our injury lawyers suggest that safety and prevention are the best measure in such cases.